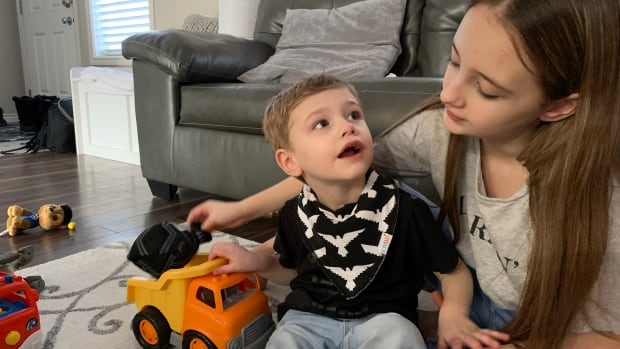 About a month ago Madden Stacey stopped walking.

It’s a symptom of Batten’s disease, the rare, incurable disease that the four-year-old was diagnosed with in December.

Now his parents have to help Madden walk or carry him. His vocabulary also suffered, shrinking to around 20 words.

It wasn’t that long ago that Madden was dancing, walking and talking in his Fort McMurray home.

“I love him so much and just want to find a cure for this terrible disease so that he can be her normal, happy and smiling laughing boy.”

Batten disease is a genetic disease affecting the nervous system. Most forms of it usually begin in childhood. Symptoms include loss of vision, loss of skills, and deterioration in cognitive function. Children have a considerably shortened life expectancy; Depending on the form of the disease and the age at which it appears, they may not live beyond adolescence, according to the US National Institute of Neurological Disorders and Stroke.

Madden has CLN2, the only strain of Batten disease with treatment. Patients with CLN2 lack an enzyme that causes brain damage.

For her treatment, Madden will receive enzyme replacement therapy every two weeks from a hole that has been implanted in her head. Treatment will slow its regression, but will not cure the disease.

Batten disease occurs when cells are unable to process materials properly, resulting in a buildup inside the cell, said Dr Janette Mailo, pediatric neurologist who works with Madden at Stollery Children’s Hospital. from Edmonton.

The result is swollen nerve cells that stop working properly, she said.

CLN2 is very rare, found between two and nine in 10 million people, Mailo said. She only encountered one other case.

The research I have done shows that no child has lived beyond the age of six to twelve.-Aaron Stacey, Madden’s father

“The hope is that we would slow down the progress and ideally he will get some of his skills back.”

But so few people have actually undergone this treatment that there is not a lot of information about its effectiveness, she said.

“There is definitely hope. It’s just very new. So we’re very careful about what we sort of promise.”

Mailo still remembers the first thing Madden’s father Aaron Stacey said to him when he showed up at the hospital: “Now Madden has a team.”

Stacey said Madden grew up normally, although looking back her son developed a bit late, which he later discovered as an early indicator of Batten’s disease.

At the age of three and a half, Madden had her first grand mal seizure. He was first diagnosed with epilepsy, but his parents took him back to the hospital in early December when he began to lose some of his skills.

“The research I’ve done shows that no child has lived past six to 12… which is very heartbreaking for a parent,” Stacey said.

He is currently on leave so he can take care of Madden and coordinate his medical treatments.

“I can’t think of anything worse than having to watch your child go through this and have no cure,” he said. “You are basically reduced to managing the symptoms.”

The family has already raised approximately $ 80,000 to help pay for travel to the Edmonton hospital.

This money will be used for gas, hotels, food and other expenses while traveling to the Alberta capital. They have to go back about every two weeks, and each trip costs about $ 500.

“As you can imagine, a situation like this is very stressful,” Stacey said. “We are very grateful for the help we have received.”