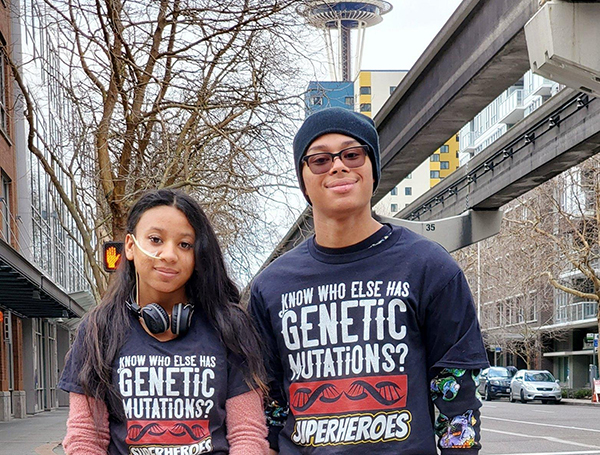 A family, two children and a 16-year-old quest for answers

In March 2020, Maleea (left) and her brother Malachi began infusion treatments at Seattle Children’s every two weeks for a rare genetic condition, CLN2.

Sabrina and Reiff Castillote knew something was wrong with the health of their daughter Maleea when she was only 5 days old. Then, the behavior of their 6-year-old son Malachi became worrying.

For over 15 years, Sabrina and Reiff have taken their children to countless specialists, but they never received a clear diagnosis. â€œWe were told our daughter was seen as a ‘failure to thrive’ with no real answer as to why,â€ Sabrina said. “Some providers thought Malachi might have autism and ataxia, but not all of their symptoms are aligned.”

In 2017, Malachi was cycling to high school when he was hit by a car. Malachi was taken to the local hospital to treat his concussion and have a brain scan; he also felt an increase in tremors that spread throughout his body.

The incident ultimately led the family to Dr. Dararat Mingbunjerdsuk at Seattle Children’s. During their meeting with Dr Mingbunjerdsuk, Sabrina and Reiff shared their concerns about Malachi’s health. After several follow-up appointments, Malachie underwent a genetic test which gave uncertain results.

Malachi was referred to the biochemical genetics team, who confirmed a diagnosis through enzyme analysis and targeted genetic testing for Sabrina and Reiff. On September 26, 2019, the family learned that Malachie suffered from a rare terminal genetic disease called neuronal ceroid lipofuscinosis 2 – or CLN2, a form of a group of inherited disorders known as Batten disease.

The team recommended that Sabrina and Reiff’s two other children, Maleea and Azriel, also undergo genetic testing. Just three days before Maleea’s 14th birthday, the family learned that she too had CLN2. Azriel, Sabrina and Reiff’s youngest son, has tested negative.

The news that two of their children were suffering from CLN2 was devastating. â€œI think there’s something uniquely difficult about being diagnosed like this when your kids are older,â€ Sabrina said. â€œWhen a child is younger, parents can shoulder a lot of the burden, but our children were almost 14 and 18 when they were diagnosed. They were in school and had their own lives and dreams. Malachi was the school mascot for four years and loved to powerlift and play the piano, and Maleea was a cheerleader and was discovering what to be a young woman. These things were ripped off and “normal” life stopped. Our lives have changed forever.

There is no cure for CLN2, so it’s crucial that patients start treatment as quickly as possible to slow the spread of symptoms. Unfortunately, because CLN2 is such a rare diagnosis, few health organizations are offering a treatment. At the time, Seattle Children’s had not done so, so Dr Irene Chang, the family genetics provider at Seattle Children’s, put them in touch with the Orange County Children’s Hospital, the facility. closest that processes CLN2.

On October 21, 2019, the family flew to California for a date at CHOC. Malachi and Maleea each needed brain surgery to place a reservoir hole under their scalp. The port would lead to the middle of their brain and allow them to receive enzyme drugs every two weeks via brain infusions; it would help slow the symptoms of CLN2 but would not cure the disease. Due to the nature of Malachi and Maleea’s condition, the family began wearing masks before the start of the pandemic.

Sabrina, Reiff, Maleea and Malachi stayed near CHOC for several months before returning home on December 29, 2019. Over the next several months, the family would be flying or driving from their home near Seattle to California all. every two weeks for Malachi and Maleea’s brain. infusions.

Brain infusions closer to you

While the Castillote family were in California, they kept in touch with Irene regarding the possibility of receiving their brain infusion treatment at Seattle Children’s, which would allow the family to stay together during the treatment, and Malachi and Maleea. to stay in school more.

â€œWe weren’t starting completely from scratch; we had experience treating other patients with brain infusions, but CLN2 was a new disease for Seattle Children’s and required us to use a new drug, â€Pearson said. â€œOur team of providers of advanced infusion practices worked with the Neurosurgery, Biochemical Genetics, Pharmacy and Brain Tumor teams to create novel processes for drug and port access. We also had to train the health-care teams in the infusion procedure, the drug itself and the management of potential patient reactions.

In March 2020, Maleea and Malachi received their first infusions at Seattle Children’s.

Irene and the care team prepare to access Malachy’s port for treatment. Malachi likes to play the piano; he is pictured here using his seven-hour brain infusion therapy session to train.

Brain infusions are an intense and invasive method of receiving drug therapy; each infusion requires shaving of the patient’s head. Until a healthcare team can identify the right combinations of drugs, patients can experience incredible illness, fatigue, and pain from infusions. After Malachi’s third infusion, he had to be hospitalized for three days with vision problems, a side effect of the infusions.

In 2020, the family asked Seattle Children’s to receive treatment through chest ports rather than brain ports, an easier and less invasive method for patients, but requiring a unique and complex surgery. Dr Jason Hauptman, who helped establish Maleea and Malachi’s brain infusion therapy at Seattle Children’s, connected with a neurosurgeon at another facility to learn more about the innovative surgery he would need to perform to pass. to a chest port.

When Maleea and Malachi needed to shave part of their head for surgery, Sabrina shaved hers as well.

In December 2020, Maleea and Malachi were operated on. Today, they are among the first people in the world to receive this treatment using the chest port configuration.

Sabrina and Reiff are grateful that Malachi and Maleea could have infusion treatments closer to home, and to the Seattle Children’s Care Team for paying attention to the little details that make their care more manageable – like s Ensure the family has adjoining rooms so they can come and go to visit their children during the seven hour treatment sessions.

Going forward, Maleea and Malachi will continue to receive bi-weekly infusions in Seattle and visit CHOC every six months to manage care and continue diagnostic testing.

Ultimately, the Castilians are hopeful that their relationships at Seattle Children’s and CHOC, along with outreach through social media and CLN2 conferences, can help make things a little easier for future patients. â€œLike other families with rare diseases, when we were diagnosed we had to put together a lot of stuff – where to go for care, the latest research, support and mental health resources. My goal is to help prepare information like this for future families up front, â€said Sabrina. â€œWe were lucky with two good teams: CHOC for research and care management, and Seattle Children’s for infusions. We are in a race against time until there is a cure.