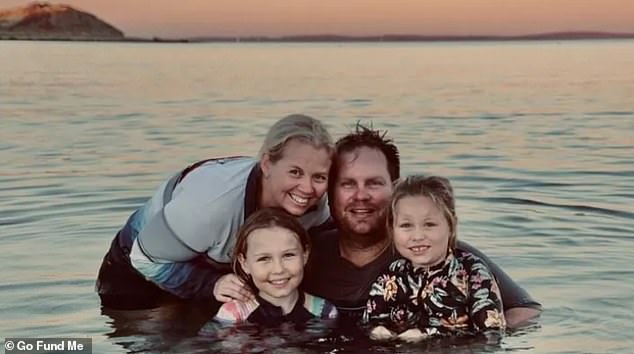 When an Australian mother noticed her young daughter was rolling her eyes a lot, she dismissed it as cheeky behavior, but in reality she was suffering from an extremely rare and fatal condition.

Amanda Gilpin, from Karratha in Western Australia, spent months in hospital with her daughter Hollie, now seven, until doctors finally diagnosed her with Batten disease, an incurable form of childhood dementia .

Hollie’s variety of Batten disease, called CLN5, is so rare that there is only one other child in Australia with the disease and 80 worldwide, and his life expectancy stretches from late childhood to middle adolescence.

Amanda first took Hollie to the doctor when she was five years old when she noticed she was having hearing and vision problems.

While waiting for test results, the mother-of-two began to notice more unusual things about Hollie’s behavior and saw that she was behind her peers at school.

“She couldn’t cut in a straight line and we had to repeat ourselves a lot,” she told Kidspot.

After some Googling, Amanda realized that Hollie also had “absence seizures” where she would “stare blankly”.

You wouldn’t know it if you weren’t looking for it. She would drain and couldn’t hear us,” she said.

Amanda took Hollie back to doctors who ordered an MRI and spinal tap to seek a diagnosis and the family waited an agonizing three months for results.

On April 9, 2021, Amanda and her husband Craig received the news that no parent wants to hear, that their daughter has an incurable disease and may not live to see her teenage years.

Children with Batten disease are usually born healthy and develop normally before they begin to show symptoms of the disease. The age at onset of symptoms, the range of symptoms, and the rate of disease progression differ between the different forms of Batten disease. Affected children suffer from progressive deterioration of brain and retinal cells, leading to a variety of severe symptoms and ultimately premature death.

The most typical symptoms of Batten disease over time are:

– Progressive motor decline and loss of ability to walk, talk and communicate

There is no known cure for any form of Batten disease. Globally, Batten disease research and the development of new treatments are accelerating at an unprecedented rate. Treatments such as gene therapy, stem cell therapy, small molecule therapy, and neuroprotection are currently being investigated.

“I went numb and in shock…then I collapsed and just cried and cried. We made the bravest face we could for the girls, but the week and month that followed, we barely worked. It didn’t feel real – I felt like I was on another planet,” Amanda recalls.

Hollie is increasingly weakened by illness, some days suffering from seizures every few minutes.

“His poor knees are torn to shreds after falling to the ground,” Amanda said.

“Her speech has also diminished, so if she sees me crying she’ll be like, ‘Mom, sad’.”

There is currently no cure for Batten disease, but Craig and Amanda are soon traveling to the United States with Hollie and their eldest daughter Maddison in hopes that she will be chosen to take part in a medical trial testing a potential drug. (JFK airport pictured)

There is currently no cure for Batten disease, but Craig and Amanda are traveling to the United States soon with Hollie and their eldest daughter Maddison in hopes that she will be one of three children in the world chosen to participate. to a trial testing a potential drug.

Hollie will have to undergo a series of tests to see if she will be accepted and if she enters, the family will have to spend six months in New York where she cannot work.

A heartbreaking 75% of people with the disease don’t live to see their 18th birthday.

“We know we don’t have long,” Amanda said.

In addition to the trip to America, the funds will cover home amenities and amenities not covered by the NDIS to make Hollie’s life easier as she loses her job.

As Hollie’s condition worsens, the trial gives the family a glimmer of hope and Amanda “prays” for it to be a success.