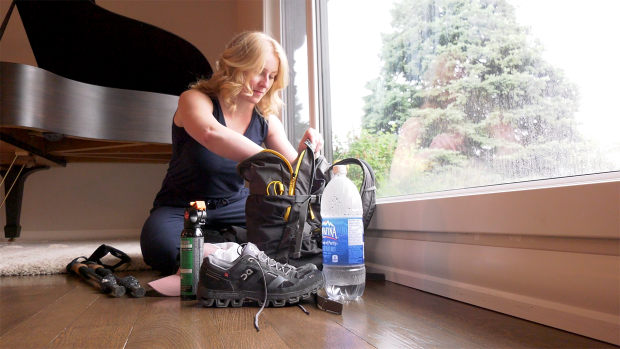 CALGARY – Jeanine Dalton is looking to climb three peaks in one day. It’s a tough task at over 22 kilometers with an elevation of 2,920 meters, but according to Dalton it’s nothing compared to what his friends of the Lamprecht family face every day in their home to the west of ‘Edmonton to Evansburg.

Katie and Jacob Lamprecht have four children. Their three youngest were diagnosed with a genetic defect called Juvenile Batten disease.

“Well it always starts with vision loss and that’s how people are diagnosed,” Katie said. “Begins between the ages of four and seven, then progresses to seizures, dementia and loss of mobility. “

It is a terminal illness that attacks the central nervous system and there is no cure. The life expectancy of an affected person is between 16 and 22 years.

Kiara is ten, her sister Hannah is eight, and AJ is five. The girls were diagnosed last November and the family just found out about AJ in June.

Jeanine Dalton used to babysit when she lived in Evansburg. She now lives in Calgary and works as a Licensed Practical Nurse, but still has a strong connection to the Lamprechts.

“I have become very close to the family,” said Dalton. “They made me really welcome and took me as their own and we’ve just maintained that relationship over the years, so I consider them family.”

She decided to take action when AJ was diagnosed with the extremely rare terminal illness.

His plan is to climb three mountains near Canmore: Lady MacDonald, the eastern end of Rundle, and Ha Ling with the help of a handful of hiking friends.

“I tried to do three mountains in one day two weeks ago just to test the waters and see how I felt,” said Dalton. “So I think doing little challenges like this will be really helpful.”

Her goal is to raise $ 10,000 and raise awareness of Juvenile Batten disease. The money will be used to help the family cover medical costs and possible treatments.

The Lamprechts spend a lot of time researching treatments that might help their children. They found an experimental stem cell replacement treatment at Duke University in North Carolina.

“There was a lady in the United States who did this with their daughter five years ago and she hasn’t shown any progress in five years,” Jacob said. “But the problem with this treatment is its $ 1.7 million per child that you have to put down before it does anything.”

Dalton will begin his ascent in the early morning hours of August 7th.

Learn more about the family and how to donate here: