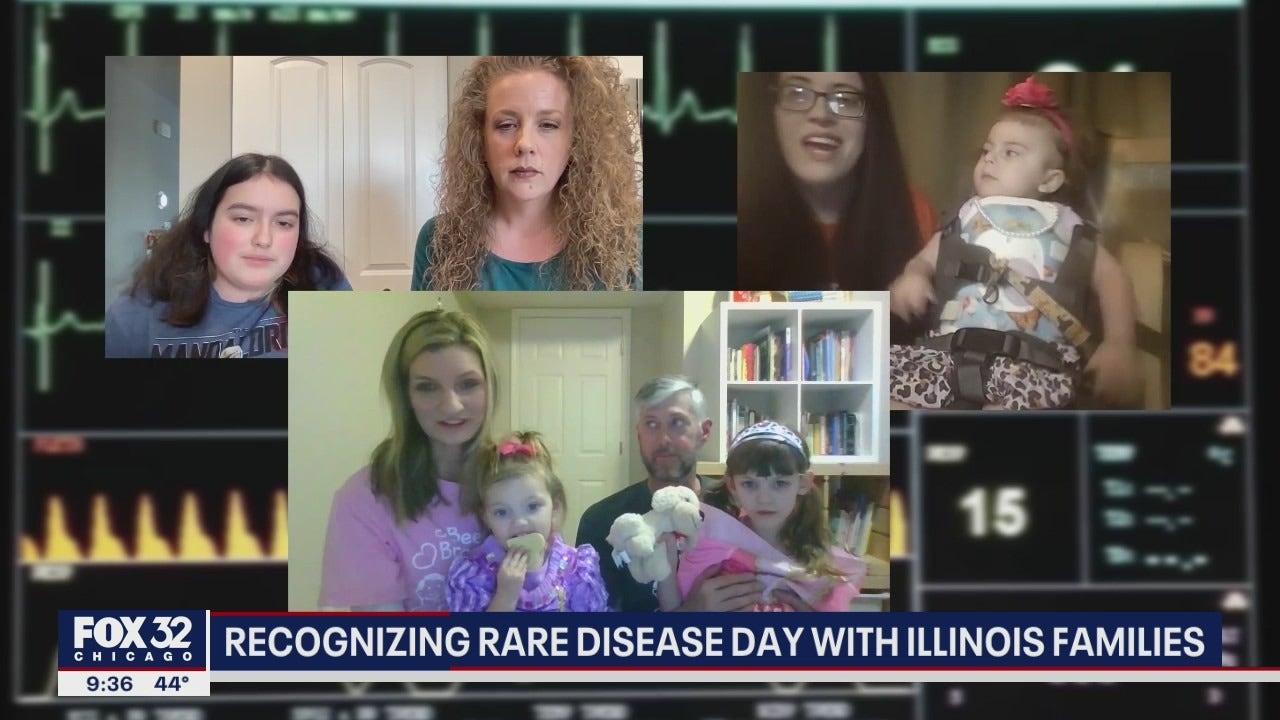 There are over 7,000 rare diseases affecting 300 million people worldwide. We visit again three Illinois families who have children with unique diagnoses, who are moving forward with hope. FOX 32 first covered their stories last year.

There are over 7,000 rare diseases affecting 300 million people worldwide. We visit again three Illinois families who have children with unique diagnoses, who are moving forward with hope. FOX 32 first covered their stories last year.

Brooklyn Konczak will celebrate her second birthday in March, a milestone for a baby who was not expected to live five months. She was one of the first children in the country to receive gene replacement therapy for the rare disease spinal muscular atrophy type 1.

Since our last visit to Brooklin a year ago, she has qualified for a brand new drug and hopes to sign up for a third. They work to save her from a disease that typically robs a child of a child’s ability to walk, talk, and even breathe.

“She talks a lot now,” Angela said, as Brooklin chatted away in the background. “Her vocabulary has expanded. Also, if you notice her grabbing my hair, her range of motion with her hands has improved so much.”

In Joliet, 15-year-old Elizabeth Reyes is back in school.

“She’s the strongest she’s been since she was diagnosed. She’s doing great,” her mother, Stacey, said.

Last May, Elizabeth received a kidney transplant after being diagnosed with a rare kidney condition called nephronoptisis which commonly strikes teenagers. By the time symptoms appear, children are already in the end stage of kidney failure.

“As far as the future is concerned, the transplant is not a cure, so at any moment anything can change. We just hope that every day is good for her,” Stacey said.

“We celebrated the girls’ first year of treatment, so it’s been a year of infusions for both girls and we are very grateful to them,” said Amanda Beedle, the girls’ mother.

At age 5, Annabelle was diagnosed with CLN2, a form of Batten disease, which is a rare genetic disorder of the nervous system. Her one-year-old sister, Abigail, who had not yet shown symptoms, was also tested and has it too.

“Annabelle is still walking. We are very encouraged by the amount of language she has maintained. She can choose her tutu every day. And we know that without these infusions, life would change very drastically for us for the worse,” said said Amanda. .

The sisters receive brain infusions twice a month to slow the progression of the disease. Life expectancy without treatment corresponds to the end of adolescence.

“We also look forward with hope to new developments, not just for CLN2 but for all forms of rare diseases,” Amanda said.

All of the children are being treated at Lurie Children’s Hospital in Chicago.

Brooklin’s family is raising money for a specialty wheelchair that insurance won’t cover, to give her independence. They also need a wheelchair accessible vehicle and a day nurse. For more information or to donate, go HERE.

Friends of the Beedle family also fundraise on their behalf for expenses that medical insurance will not cover. Learn more here.