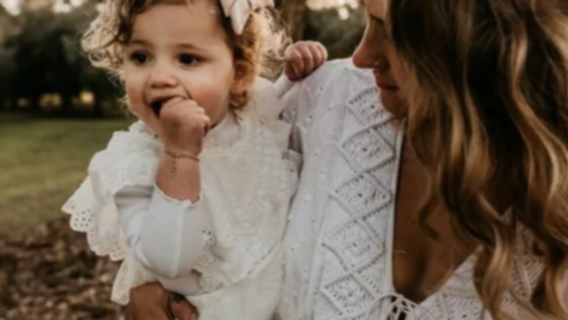 The parents of a Melbourne toddler suffering from childhood dementia are asking for help to save her from the cruel disease which is robbing the little girl of her childhood.

Isla Hunter was once an energetic child, but the three-year-old is confined to a chair, illness robbing her of her mobility and her speech.

The little one had enjoyed a happy and healthy childhood, but in late 2020 parents noticed that her development was stunted and she had stopped reaching her “normal” milestones.

Over the course of a few weeks, the little girl lost the ability to walk, stand, chew and was lethargic.

On April 16, 2021, Isla was diagnosed with rare childhood Batten disease, which is a type of childhood dementia that strikes brain cells and the nervous system.

Isla is one of only two Australian children with the disease and the prognosis is devastating.

“(He takes your breath away. He still does,” dad Harley told 7NEWS.

“(We were told) to make her as comfortable as possible and wait for her to run her course…because there is no cure.”

Isla’s only chance now is a first World Trial in the United States.

“Children involved in the trial will receive what is effectively a healthy copy of the gene injected into the brain or central nervous system,” said Dr Ineka Whiteman of the Batten Disease Association.

The gene therapy drug is ready to launch and about to be approved, but the pharmaceutical company halted the trial after suffering huge financial losses due to the downturn in the biotech market.

The Hunter family is begging investors to help fund therapy that could save Isla’s vision and increase her life expectancy.

“It sucks to say that our daughter’s life is at stake. We are in a fight against time,” said mother Nikita.

There is a GoFundMe page to raise money for the family to take Isla to the United States to pay for treatment, accommodation, visas, flights, insurance, physio, and overseas relocation.

“It is extremely painful and we understand that we are not the only ones to face this kind of thing. It’s hard to understand and completely unfair,” Harley and Nikita wrote on the fundraising page.

“I know most parents will hold their children a little tighter tonight because that’s where the real beauty and richness comes in.

“Thank you so much for your listening, your kindness and your generosity, giving Isla a chance to fight for gene therapy means more than you think.”