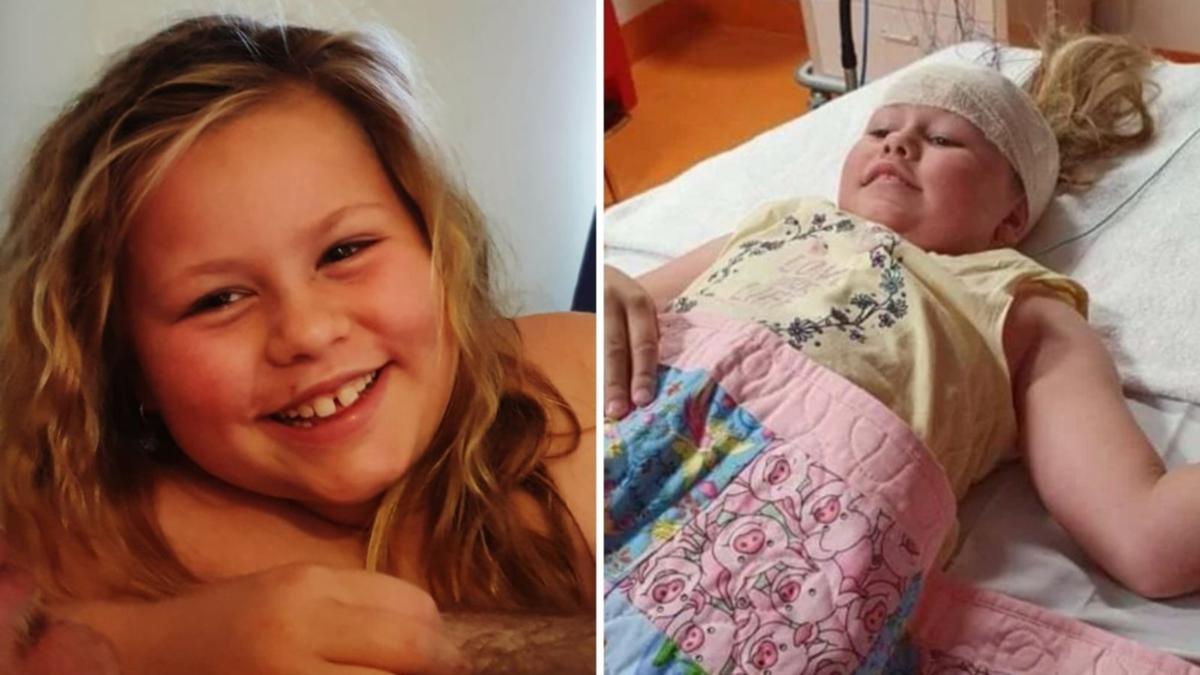 Symptoms of childhood dementia, Batten disease by an Australian mother whose daughter’s eyes were a sign of diagnosis

But in reality, Holly was slowly losing control of her nervous system.

Eighteen months after Amanda first noticed the strange signs – and aged just seven – Holly was diagnosed with an extremely rare and incurable form of childhood dementia, known as Batten disease.

For more lifestyle news and videos, check out Lifestyle >>

“She was like an old dementia patient with a lot of empty spaces in her brain,” Amanda says of her baby girl’s MRI scans.

By mid-teens, Holly will likely be bedridden – unable to eat, walk, see or speak without help.

And it’s likely she won’t live to be an adult.

Highlighting the exceptional rarity of her fatal condition, Holly is one of only two Australian children with the disease.

Now her family is hoping for a miracle – that their baby girl will be one of only three children in the world to be selected for a US trial of a possible new drug.

The Gilpin family first noticed something was wrong when Holly was in school and she began to fall behind her peers in milestones.

Amanda and her husband Craig weren’t too worried, thinking their daughter was just a little slow to begin with.

“It was things like not being able to cut [something with scissors] in a straight line,” says Amanda, from WA.

While waiting for test results, she began to observe more bizarre behavior from Holly.

“She would sometimes stare into space and her eyes would blink,” she says.

At first, she thought Holly was just “a little shit.”

“It’s hard to tell if your child is just ignoring you and being mean, or not really hearing you,” Amanda recalls.

That’s when the mum started researching online and learned that Holly was showing signs of absence seizures – where someone ‘disappears’ or stares blankly for a few seconds.

With a name for some of Holly’s symptoms, Amanda returned with her baby girl to the medical experts, who ordered an MRI and spinal tap.

After an excruciating three-month wait, the family received the devastating news that Holly had Batten disease – an incurable inherited disease that attacks the nervous system.

Holly will gradually lose the functions she has until by mid-teens she may not be able to perform basic functions like eating, walking or talking without help.

“She will be bedridden,” says the heartbroken mother of her daughter’s devastating prognosis.

Upon hearing what was in store for their baby girl, Amanda said she and Craig “just sat in silence – we cried and held each other”.

Seventy-five percent of young people with Batten disease do not live past their 18th birthday.

“We know we don’t have long,” Amanda said.

With no cure, treatment may help relieve Holly’s seizures, but her general condition continues to deteriorate.

One of the most shocking moments for her parents was dealing with Holly’s MRI scans.

“There was brain atrophy – it was basically wasting away,” the mother says.

“She was like an old dementia patient with a lot of empty spaces in her brain.”

But then, a glimmer of hope appeared in the darkness.

A medical trial in New York is testing a possible new drug for people with Batten disease.

With only three children worldwide to be accepted into the study, the Gilpins are praying that their little Holly will be selected to participate.

“You have to be under eight years old to participate in the trial. Holly is seven years old [but] she wins those rare lotteries,” laughs Amanda.

Craig, Amanda, Holly and their eldest daughter Maddison, nine, are due to travel to the United States in the coming weeks so that Holly can undergo initial tests to see if she will be accepted into the trial.

With an incredible network of support around them, a friend started a fundraiser to help the family pay for travel and medical bills.

Amanda clings to the hope that Holly will be selected for trial – and she prays that it will be a success.

But if their baby girl isn’t chosen, Amanda knows it will be a trip of a lifetime – and can’t wait to make lasting memories with Holly.

“She loves Justin Bieber, animals and the movie Fat.

“None of that has changed.”

In the meantime, she’s sharing Holly’s story to raise awareness for rare diseases like this in hopes they get the attention and funding they need.

“Nobody should have to go through what Holly is,” says Amanda.

This Aussie mom noticed a weird detail in her son’s reflection. His instinct saved his life